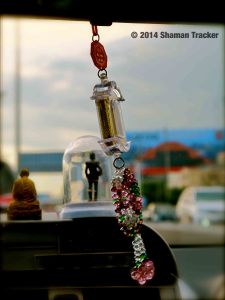 “Excuse me, what is this?”. “Protection… accident… spiriiiit.” – he replied in simple English.

With the way he was driving a little protection wouldn’t hurt, I was thinking to myself, staring at an unusual talisman hanging from his rearview mirror. I was so absorbed by the play of its colors and dangling sounds, that I completely forgot my initial excitement to discover the streets of what was promising to be one of the liveliest places in Asia. On this hell of a ride, in between the frantic swings of the talisman, I would catch glimpses of the dashboard lined with a troupe of Buddha figurines in the company of other deities, including one exquisite Goddess unknown to me. There was also a banknote and fresh flowers on this unique dashboard shrine.

I was curious to know more but, exhausted from a long trip and somewhat discouraged by his limited English, I pulled back into my seat and shut up for the rest of the ride. I was pondering how his divine crash prevention squad would surely haunt me down in revenge if I continued talking to him, and he had an accident because he would turn every time. But then, I had a feeling that the beautiful Goddess would have mercy on me. There was something motherly and reassuring about Her. I felt for her, She must have her hands full with this guy… I wished that I could see Her again and that She would take care of me 😉 . 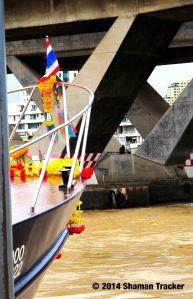 Honoring “The Grandmother of Boats”

It didn’t take long… She was smiling at me from the prow of the river boat. They call her “The Grandmother of Boats” and honor Her with flower garlands and colorful sashes and ribbons. They believe that Her spirit lives in the body of the boat, and, if respected, She will protect the boat and ensure safe journeys. She is also known as the “Mother Water”, whose abundance and cleansing powers are celebrated, side by side with the Buddha’s, on the full moon of the 12th month of the lunar calendar. This is also when the water tide is at its highest during the year, and the Mother Water’s abundance helps the fertility of the land to get the rice “pregnant”.

And thus She gives rise to the “Mother Rice” who ensures prosperity of the rice yield and provides protection from unwanted natural causes. She is highly venerated and respected even by the Sun, who at that time of the year, does not rise in the middle of the sky as usual, but follows a southerly route from east to west. It is said that the Sun does not want to cross over her head. People of Her land consider rice not just as grain but as their  essential food enlivened with Her spirit. Therefore they eat every grain of rice off their plate and would not step over rice grains just as they would not step over people. They tell stories of how when the Buddha once disrespected the Mother Rice, her spirit left and people suffered from hunger. The Buddha realized that he could not feed the people of the land and asked for help to plead Her to return. Some of the stories say that She returned home to the heavens, and some say that She stayed in a cave in the company of the Naga snake and the Garuda bird. And that She would return only once they performed a ritual to honor Her.

I have indeed seen Her disguised as an unusual naga – snake like female being with the five beautiful heads. She once protected Buddha from the elements after his enlightenment. I have also seen Her disguised as a beautiful golden garuda protecting the temple of the Emerald Buddha and the royal grounds. They call her Kinnaree. She is renowned for her dance, song and poetry, and is loved for her playful, light hearted and graceful ways. She comes from the Himmapan magic forest in the Himalayan mountains, where the worlds of the spirit and humans meet.

Some know her as the “Lady Tree” and say that she lives hidden in the old trees. They wrap big tree trunks with colorful cloths to honor Her spirit and give offerings to the trees. When a big tree needs to be cut down, people of Her land ask her permission and give Her offerings like flowers, incense and candles, bananas, and young coconut. And even colorful traditional women‘s dresses. They say prayers, and bow down to the tree. This is how She helps preserve big trees who live for hundreds years.

But, they say that She is the most highly revered and worshiped for having helped the Buddha attain enlightenment. According to a legend, as Buddha sat underneath the Bodhi tree awaiting enlightenment he was challenged by Mara ‘the evil one’ and his army. Mara was jealous and did not want Buddha to attain enlightenment. Buddha reached down to the earth with his hand and summoned the beautiful Goddess of the Earth. She rose up carrying water in her long hair. She took her long flowing hair in her hands and wrang from it a torrent of water creating a flood which swept away Mara and his evil armies.

Even though She is revered in so many ways, the Buddha is thought to be superior to the Goddesses. Goddess shrines are always separated from the Buddha shrine and are never in the main hall of the temple. I have read somewhere that, according to many Jataka tales (tales of the previous lives of the Buddha, in both human and animal form), the Buddha was previously born as a criminal, hermit, merchant, bird, rooster, elephant, or even a lizard, but it is so unbelievable that he had never been born as a woman or even a female animal…

The above story is my free interpretation of what I feel is the strong presence of the divine female in Thai life, mythology and culture, based on various literature and my two trips to this beautiful country in the past six months.

12 thoughts on “Buddha was never a woman?”